Version 4.4 of the Silhouette Studio software has a new feature called Smart Snapping. If you’ve updated recently and didn’t know it was coming, this may have confused you. In today’s tutorial, I’ll tell you what it is, show you how and when to use it, and show you how to turn it off it you don’t want it. That last one is important, because it will be on by default right after you update. I’ve included some videos here as well as it’s much easier to understand it by seeing it in action.

What is Smart Snapping?

Smart Snapping is something that may be familiar to you from other software programs, such as Microsoft Power Point or Adobe Illustrator. It’s a feature that helps you easily align objects to one another on the Design area.

I’ve been asked why you’d want to use Smart Snapping instead of just using the standard alignment tools in the Quick Access Toolbar and Transform panel. For one thing, it takes more steps to use the align tools. You have to select the shapes, then go to the alignment tools, then select an alignment option. With Smart Snapping, you just grab shapes and move them around. It’s one action instead of 3 or 4.

How to use Smart Snapping

I’m going to give you a general overview, then show you more details.

Start with 2 objects on your Design area. As you move one object, you’ll see some blue lines start to appear on your screen. They represent the outer bounding boxes of the shapes, or the middle/center of them. By moving the objects until the blue lines of the 2 match, you align them perfectly. Here are a few key things to know:

Right, I know that’s confusing. I’m going to show you a video because that will make a great deal more sense.

Smart Snapping choices are found in the Page Setup Panel, in the 2nd tab where the grid options are: 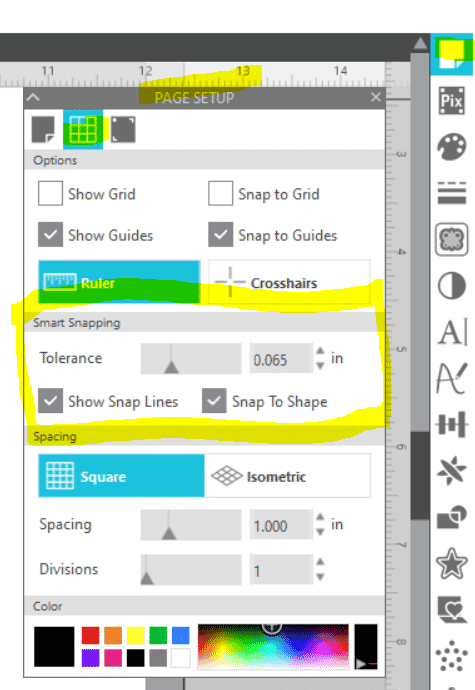 There are several options to know about when working with this feature.

This option turns the feature on or off. If you don’t like seeing those blue lines, just uncheck this box. It will be on by default when you start a software session, unless you turned it off at the end of the previous software session. If you aren’t seeing them and would like to, turn it back on here.

You can turn it off so that they don’t show, but leave the next option on. I’ll explain more on that in the next section.

If you check this box, then when the shape you’re moving gets close to the one that’s sitting still, it will “pop” toward it like a magnet. The action is very similar to when you have Snap to Grid on or when you’re editing points and open points get close to one another. Use it when you definitely want the shapes to be touching one another or aligned along those edges.

When this is off and you move your shapes around, you’ll just see the blue lines when the shapes get close to aligning with one another. That’s all — you have a guide. To me, this is more for general visual reference.

Snap to Shape is on by default. You can actually have it on while the Show Snap Lines is off. That helps you snap the shapes together without the blue lines that might be distracting.

You are using this mainly when you have Snap to Shape turned on. The lower you set the tolerance, the closer to the stationary shape you have to get with the moving shape before it automatically snaps. Or, if you have Snap to Shape turned off, before you see the blue lines. If you were to set it all the way down to 0.0, it would never snap the moving object to the stationary one. The default distance is .236 inches, which is all the way up. In other words, when the moving shape gets just under 1/4″ from to the stationary shape, it will show you the blue lines and/or snap along those edges or middles.

When would you need to adjust this? I can think of a couple of different instances.

If you have adjusted any of these options and create a new file, it will have the most recent options. In other words, say I’m working in a file and I adjust the tolerance down to .05 and turn the Snap to Shape off. If I then start a new file, those will be the options in that file. Say I adjust the options in that new file to have Snap to Shape on and a tolerance of .125, if I started another new file it would have those settings.

When you save a file, the options save with it. That means the next time you open the file, it will still have the choices selected.

Here’s a video showing you how the different options work:

It doesn’t have to be just 2 shapes you are aligning with Smart Snapping. It just works a bit differently.

Let’s say you select several shapes at once to move and they are not grouped together. As you move the set, you will see the blue alignment lines for each shape. However, the software can only do the Snap to Shape for one of those. One will automatically snap to the stationary object, while the others don’t. You’ll see the blue lines for the others, but they don’t “stick” to the edge of the shape that’s staying still.

Here’s the trick: select all your moving shapes using the normal method of click and drag around several, or hold the SHIFT key as you click on each. Before you begin moving your shapes, position the cursor over the shape you want to use as the one that will align to the stationary object. That works every time.

The same holds true if you have multiple stationary shapes on the page and you’re trying to align some ungrouped, selected shapes to one of those. The software can only snap to one of the stationary shapes at a time. If they are close together or overlap, it’s harder. As I said before, this is where adjusting the tolerance can help.

By using a combination of grouped and ungrouped shapes, you can more easily help the software figure out what is is you’re trying to align. Layers is a feature in Designer Edition and up, so you can use this if you don’t have one of the upper levels. But I’ll tell you all day long — Designer Edition is always worth it.

Another video will help explain this better:

I think I’ve covered it all here. But feel free to comment below if you have any further questions.