The first time I looked at the Silhouette brand pen holder, I was completely confused. There are 5 different pieces in the package, and the instructions made no sense to me. I had to have someone else show me. So I’m going to return the favor and pass on the knowledge to you.

Note: This post contains affiliate links. That means if you click the link and purchase something, I receive a small commission. This helps me to be able to keep my business going and provide more tutorials. All opinions expressed are my own and are not tied to any compensation.

You should know first that the type of pen holder you need depends on the machine you have.

Type B is for Cameo 4 and Portrait 3 machines only. 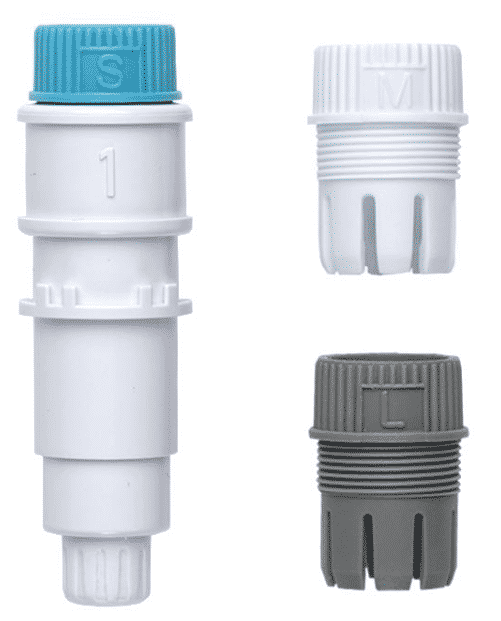 Type A is for machines prior to the Cameo 4 and Portrait 3. 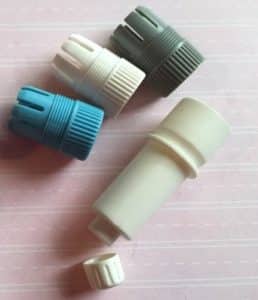 They look extremely similar, so make sure to get the right one. The former has the number 1 on it and more rims.

The parts of a pen holder

When you open the package, you’ll see 3 components:

So far, so good. But what do you DO with them?

Before I start telling you how to do this, make sure you know that these parts are plastic. That means they break easily, so be gentle. I’ll give you step-by-step directions, then show you in a video how it looks.

Slide your pen into the body of the pen holder. 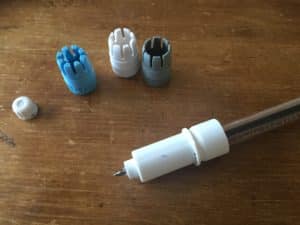 Try the different collets to see which one fits the best. Finding the right one is like Goldilocks testing at the bears’ house. You need to find one that’s not too big, not too small, but just right. It should be able to slide easily over the body of the pen, but fairly close to the pen.

Slide the collet over the pen with the toothed end (not the one with the ridges all the way around) going into the body of the pen holder. Screw it in and see if it holds the pen firmly. If the pen wiggles, try a smaller collet. 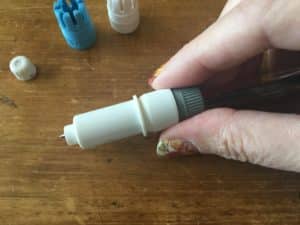 Unscrew the collet again but keep it on the barrel of the pen.

Put the cap on the end of the holder and hold it all the way on with one hand. 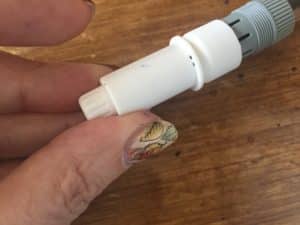 With your other hand, slide the pen through the pen holder body until the tip touches the top of the inside of the cap. That’s putting the pen at the right depth so that when you put it into the machine, it will come into contact with the material but won’t drag as it goes between the different letters.

While still holding the cap onto the pen body with one hand, and the pen at the right depth with the other, use the second hand to screw in the collet. I’ve noticed that sometimes when I do the last bit of the screwing on, the cap pops up a bit. If I notice that, I back off the screwing a bit. This is the step where you can crack the pen holder if you twist too much, so be careful. 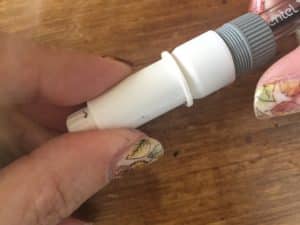 Remove the cap and your assembly is ready. Make sure to put the cap somewhere that you can find it, because it’s really tiny and the pen holder is not nearly as useful without it. 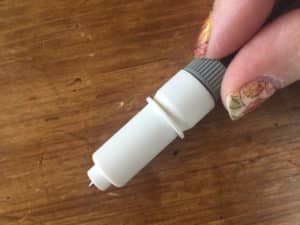 Scribble your pen a little to get the ink flowing. Put the pen holder into the machine just as if it were a blade. Make sure the collar is resting down fully on the blade holder. Then lock the lock lever.

Test on some scratch paper first to make sure it’s at the right depth. Sometimes there’s just a tad bit of difference between just right and too deep or not deep enough.

Ya, I know many of your are visual learners like me and the written instructions still don’t help. So here’s a video showing you the process.

Not every pen is going to work. You just have to test multiple types. My favorite is the RSVP from Pentel, which you can get pretty much anywhere.

If your pen draws very faint lines from the upper left to where your letters begin, or between the letters, the pen is sitting too far down in the holder. Back it off a little. Don’t forget what I said about the cap popping off slightly if you twist the collet too tightly into the body.

If you’ve got MAJOR lines coming from the upper left, that’s something that happens with some fonts but only in certain sizes and letter combinations. 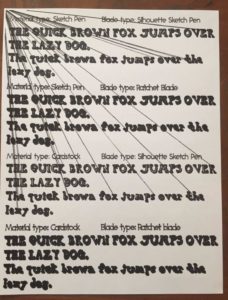 I’ve done extensive testing and tried all the tricks. Trust me, sometimes nothing works but to change to a different font.

Another possible cause is an older cutting mat. If your mat has lots of grooves it in, it’s an uneven surface. Therefore, the pen can’t draw evenly.

Little notches at the corners of your letters 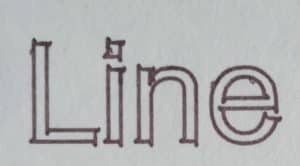 You didn’t select Sketch as the Action in your Send area. The machine handles a pen differently than a blade, since when cutting it wants to make sure all the corners get cut through. Always choose the Sketch action when using a pen.