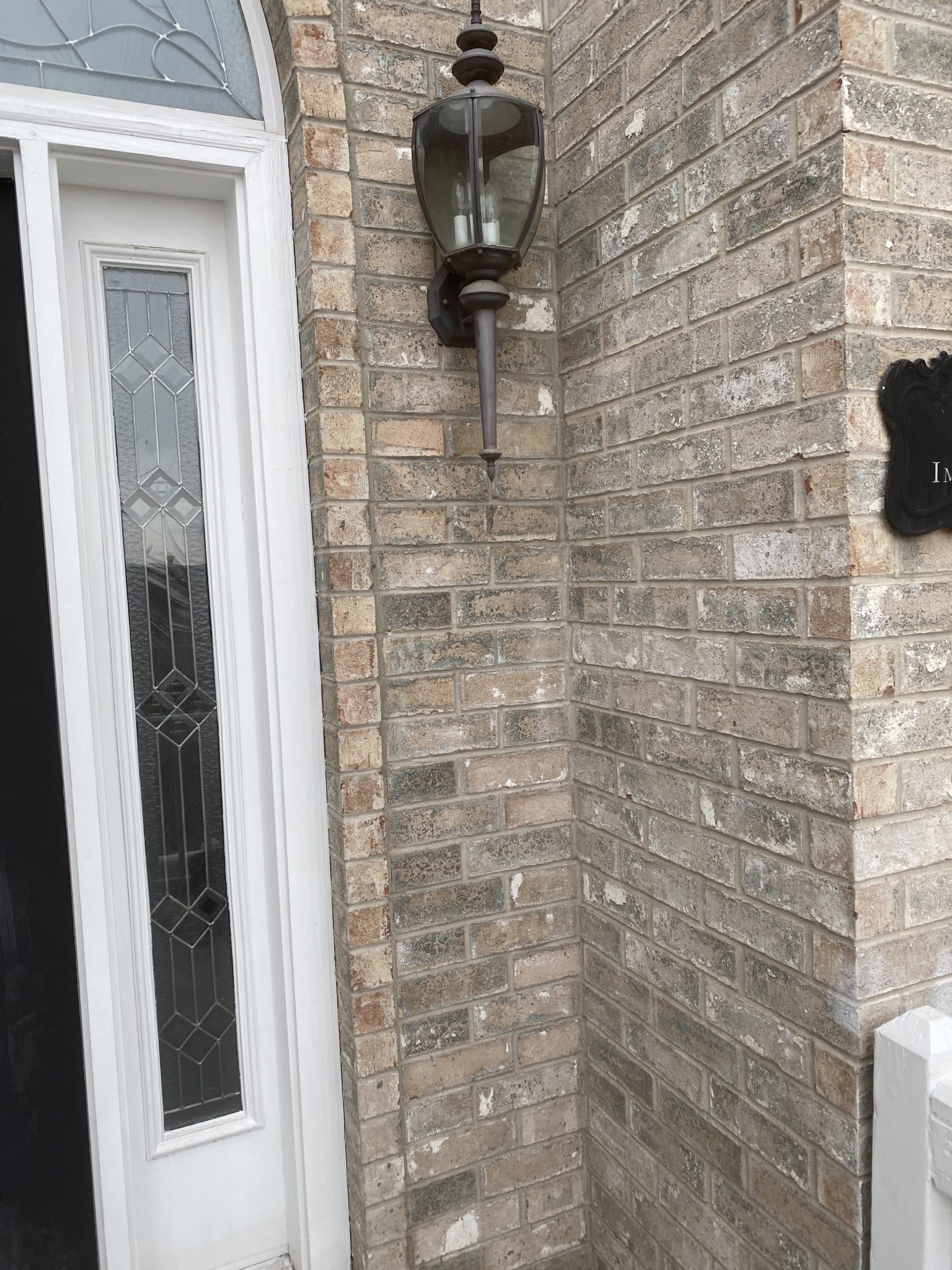 It’s SPRING!!! It took a really long time to arrive here in Utah, so we’ve been working on the outside of our home as much as possible now that it’s here. We got new lights for beside our front door (yes, those are the old lights) and I realized how absolutely hideous the porch looks in general. Besides adding flowers and a wreath and painting the door, I wanted to add a Welcome sign on one side. (See that project tutorial here.) The other side has a chair, so this corner looks like it’s just begging for one of those tall, thin signs with a layered, retro font.

Those fonts are a big trend right now and that’s what I wanted to use, but I just couldn’t find just what I was looking for. In fact, I bought a layered font and it ended up being terrible quality. So I’m going to share with you how I took a regular old font and made it extra special. (I’ll share in another post instructions for making the actual sign).  Here’s the layered look I created. 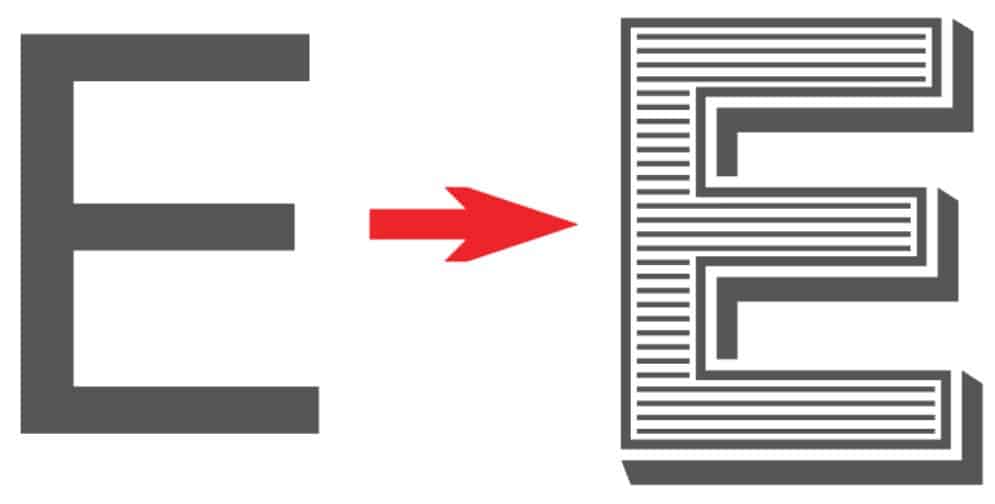 Note: This post contains affiliate links. That means if you click the link and purchase something, I receive a small commission. You pay the same price. This helps me to be able to keep my business going and provide more tutorials.

Step 1: Pick out a non-layered font

For creating my layered letters, I used Arial, which comes pre-loaded on most computers. In fact, it should be the default font when you create a text box. The reason this works well is it’s a sans serif, block font that has “legs” that are fairly thick and of a consistent width. This makes the step of putting a pattern in the middle of the layered letters (like my stripes) much easier. Just plain Jane, because we’re going to jazz it up. I recommend you practice with this one first so you learn the steps, then you can play with other fonts if you like.

Make a normal text box in a fairly large font size (you can change it later). Type out your phrase.

For my sign, I wanted the text to be vertical. Here’s how we do that–

You have the basis for your sign now. This is the part that will end up with that pattern like my stripes.

The next part of the layered letters is an outline frame. To make this, you’re going to create 3 offsets. It’s helpful to fill these with different colors. When you create offsets they are unfilled and the different colors help you keep them straight. I’m going to switch to showing just 1 letter so you can see more clearly. 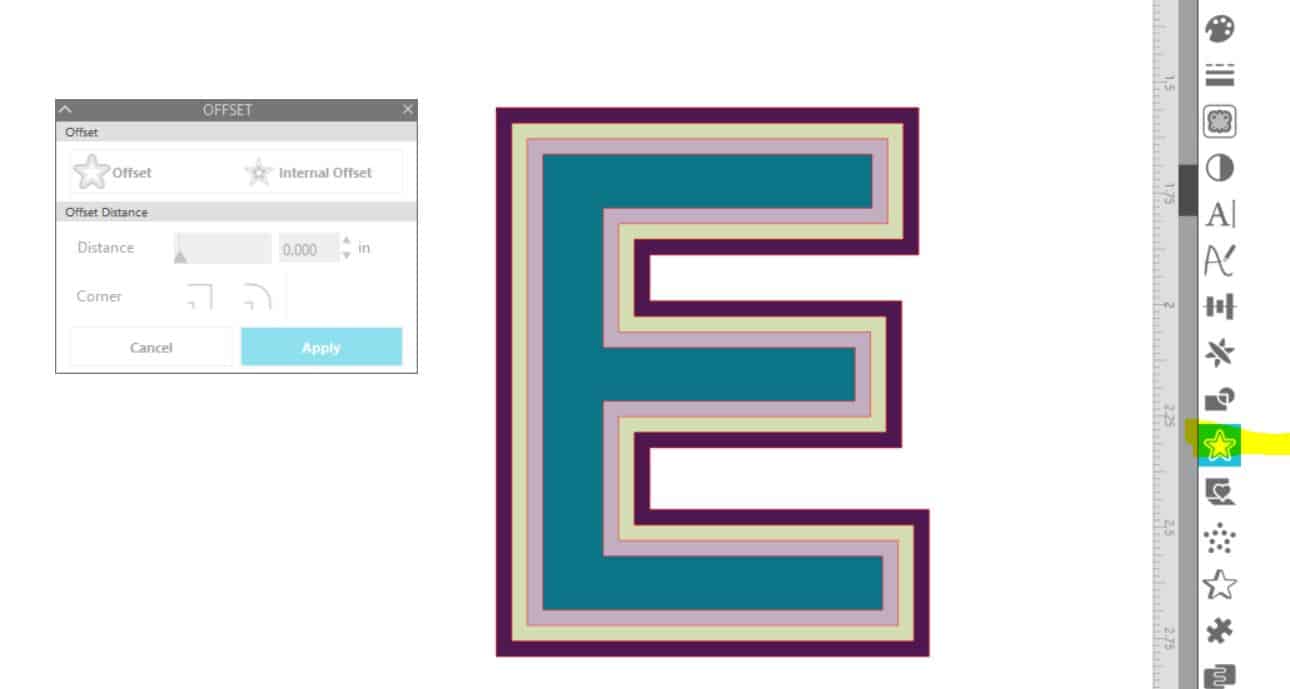 I will warn you that on slanted line segments, the Offset tool will square off pointed corners like this. 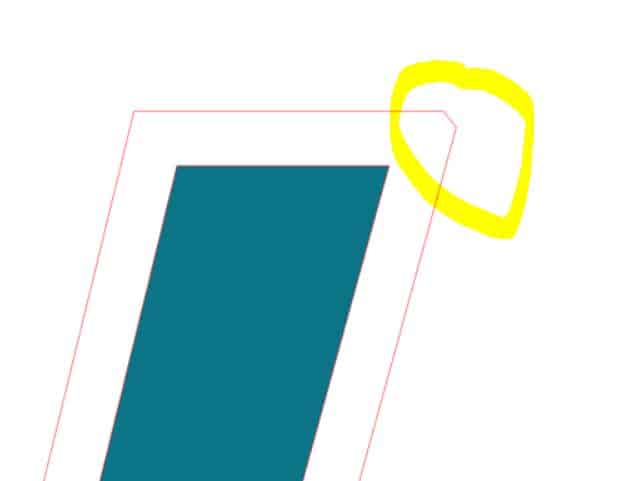 If that happens and you don’t like it, you can either do some point editing at this point, or try internal offsets instead. The problem with the latter is that then your letters might end up too thin. You just have to play with it to determine what works best for you.

We want to make the first and second offsets into a frame. Select them both and then makethem into a compound path with the right click menu, in the Object drop down menu, or in the Modify panel. You can see here mine keeps the light green color, because that piece was bigger. The dark purple is visible between it and the original letter in turquoise because there’s now empty space there. 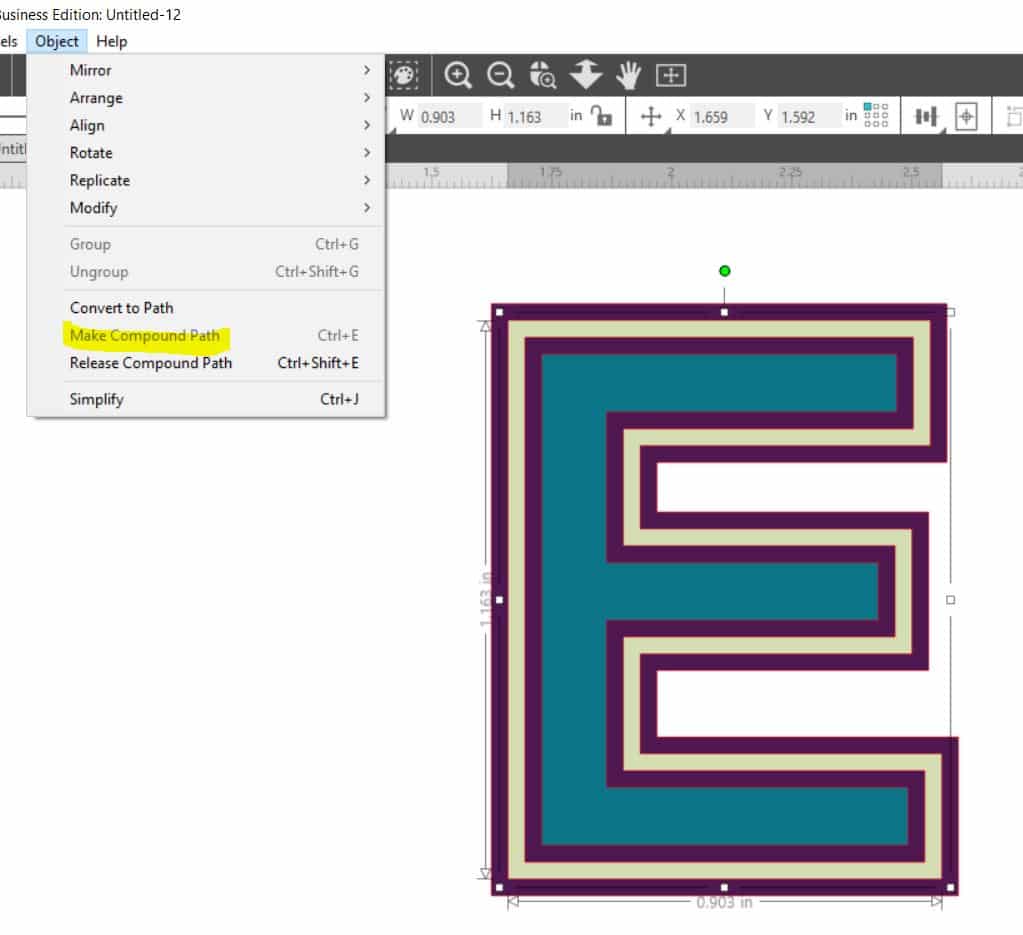 The next thing to make is a shadow. There are 2 ways to do this.

This is an option in Designer Edition and up. If you don’t have that, you can skip to Option 2. But I will tell you all day, every day, that the cost of Designer Edition is worth what you pay. You can buy it here. Use the code 10OFF at checkout for a 10% discount. This is a digital download so you can use it right away.

So, the Shadow tool. You’ll find this in the Image Effects panel. Select your remaining offset — #3 that’s at the outside, the one that’s dark purple in my example — and choose either Fixed or Dynamic. (Honestly, I haven’t been able to find a difference in these in this software). This puts a shadow slightly below and to the right of that third offset. 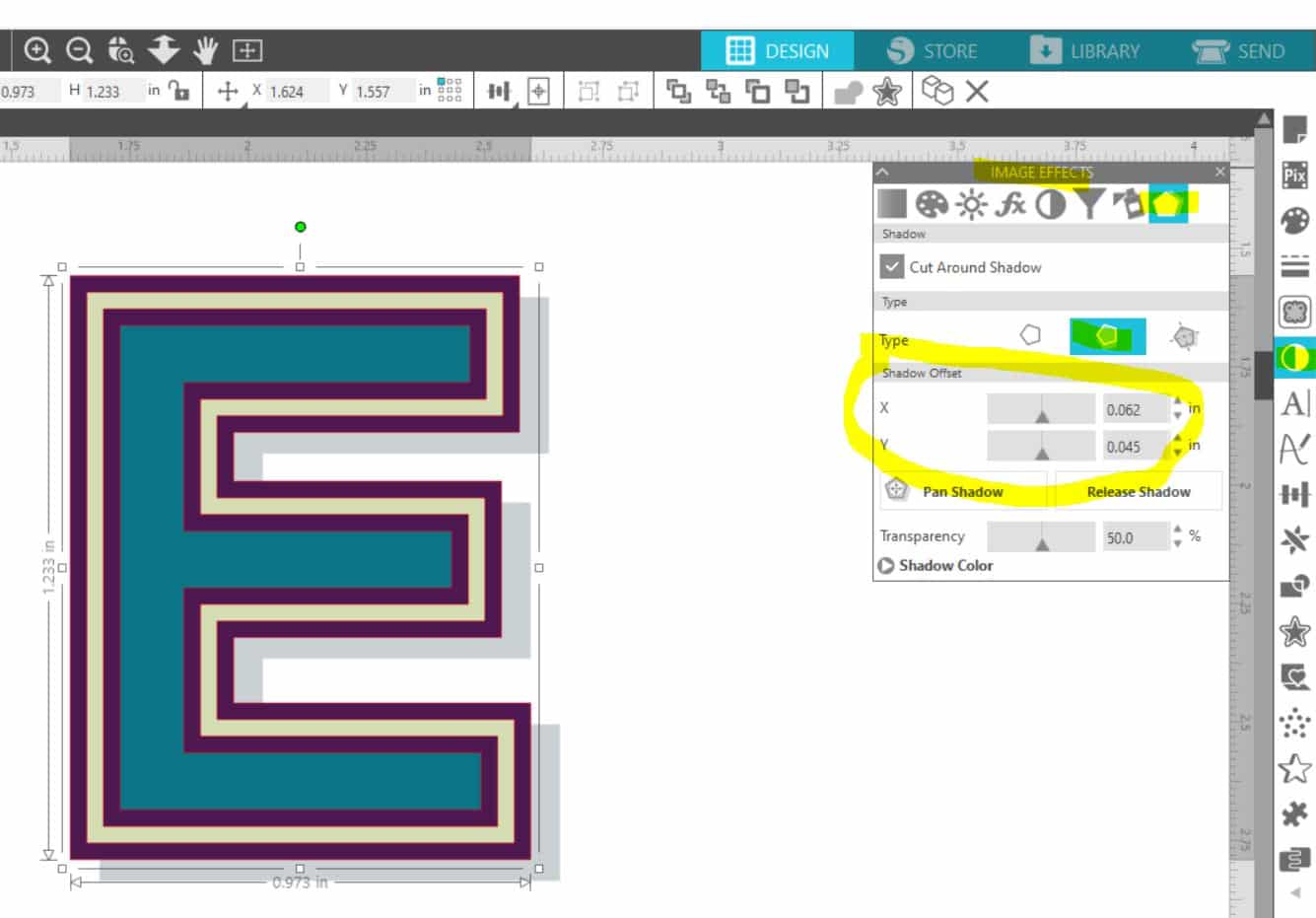 You can move that by either changing the amount or by using the Pan Shadow feature to move it freely. Set it wherever you want it, with the understanding that it’s going to end up a bit smaller than it is right now because we’re going to chop some of it to add the space between the frame and shadow. In other words, my dark purple will go away and my shadow piece will be slightly separated from the light green piece.

Once you have it the size you like, click Release Shadow to make it a separate piece. You’ve essentially created a new copy of the letters. By default, this will be filled with gray with 50% transparency. Change that if you like, but it will only matter if you’re printing the project. 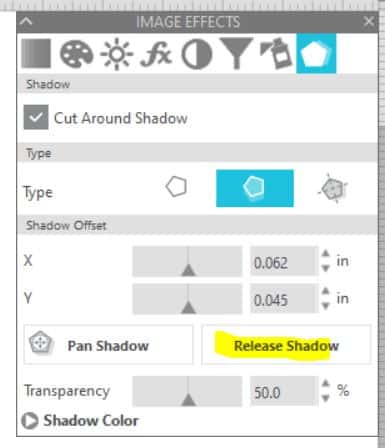 If you didn’t read Option 1, glance over that last paragraph. That’s what you’re going to do. 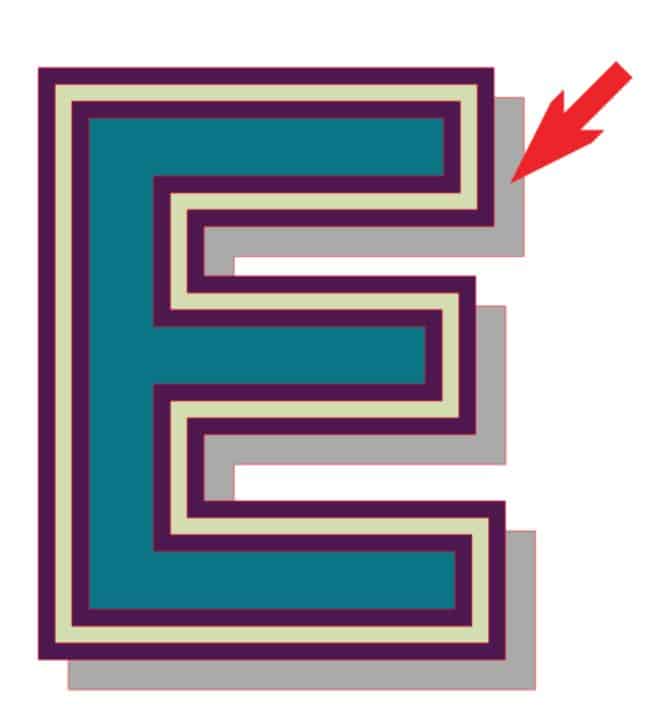 Create the space between the frame and shadow

Select your third offset and your shadow (so my dark purple and gray, respectively). In the Modify panel, use Subtract. That means the offset will cut away the portions of the shadow that are behind it, then disappear. You’re left with a shadow that’s a bit separated from what will be your frame. 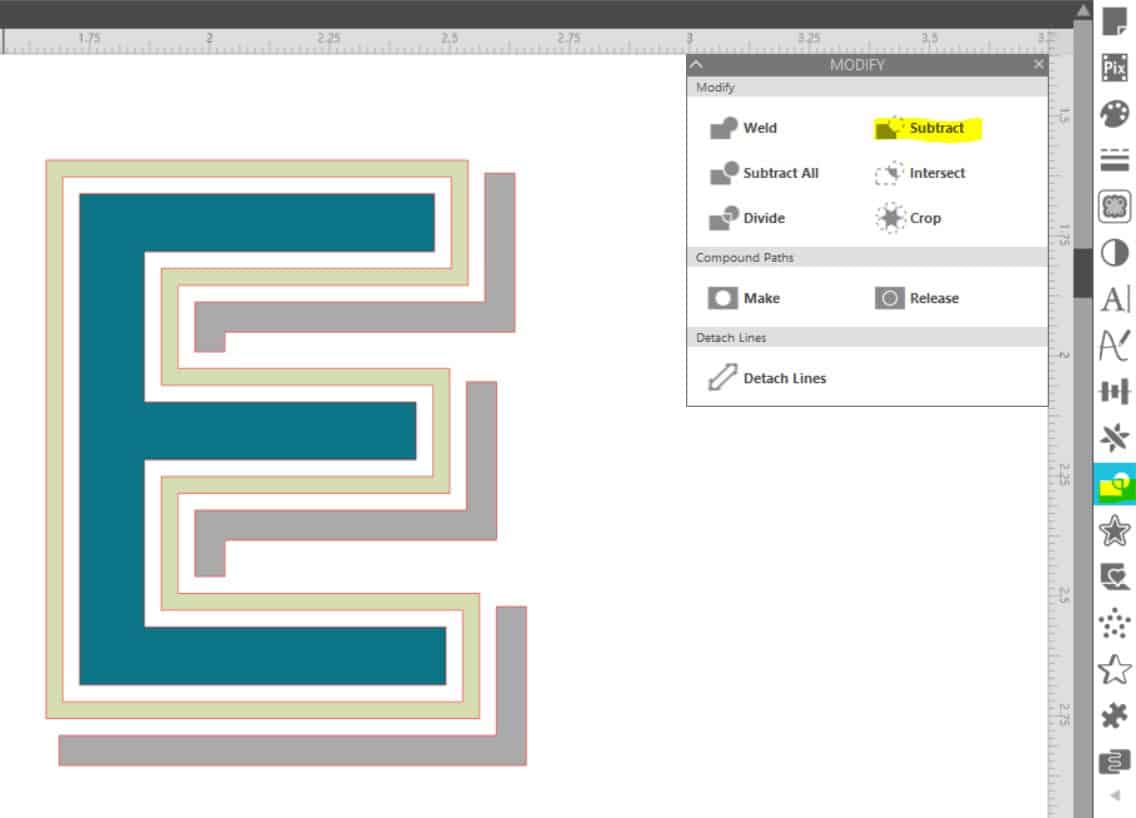 Using a Modify option like this will make separate pieces of anything that’s not touching. So as soon as you Subtract, while the pieces are all still selected, make them into a single compound path as describe in Step 4.

Pretend your text is 3-D. Now pretend that you’ve got a flashlight and you shine it on your text box from above and slightly left. The shadow you get would look 3-D. We created shadows that are 2-D in order to make the original text look more 3-D, but it’s not fully looking that way. There’s one more trick you can pull if you like.

With an actual shadow, the edges of it would be slanted. If you want to make your shadow letters look more like this, use a bit of point editing. Some 90° angles you’ll make more like 45°. It’s hard to explain that in words, so here’s what I mean. 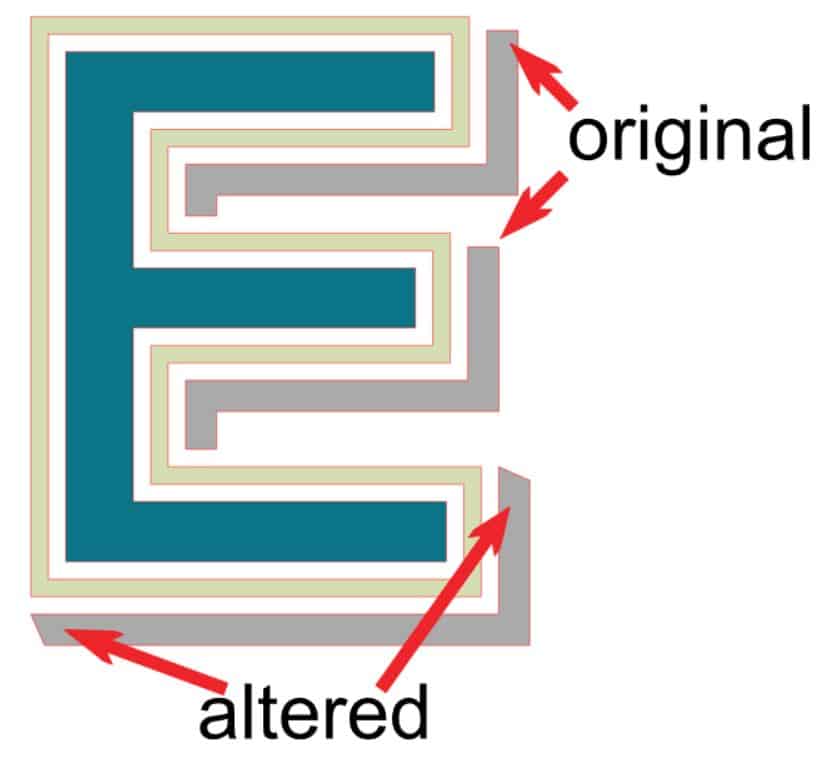 Go all the way back to your original text box now — the one that’s in the very middle. Make a copy of it for safekeeping. What we’re doing now will change that text box into a regular image. That means you couldn’t go back later and figure out what font you were using. If it’s easier for you, group the frame and shadow with that text box copy and scoot them out of the way for now.

I used stripes, but you could use any pattern you like. I drew a series of long rectangles to cover my text box, then deleted every other one.

To watch out for 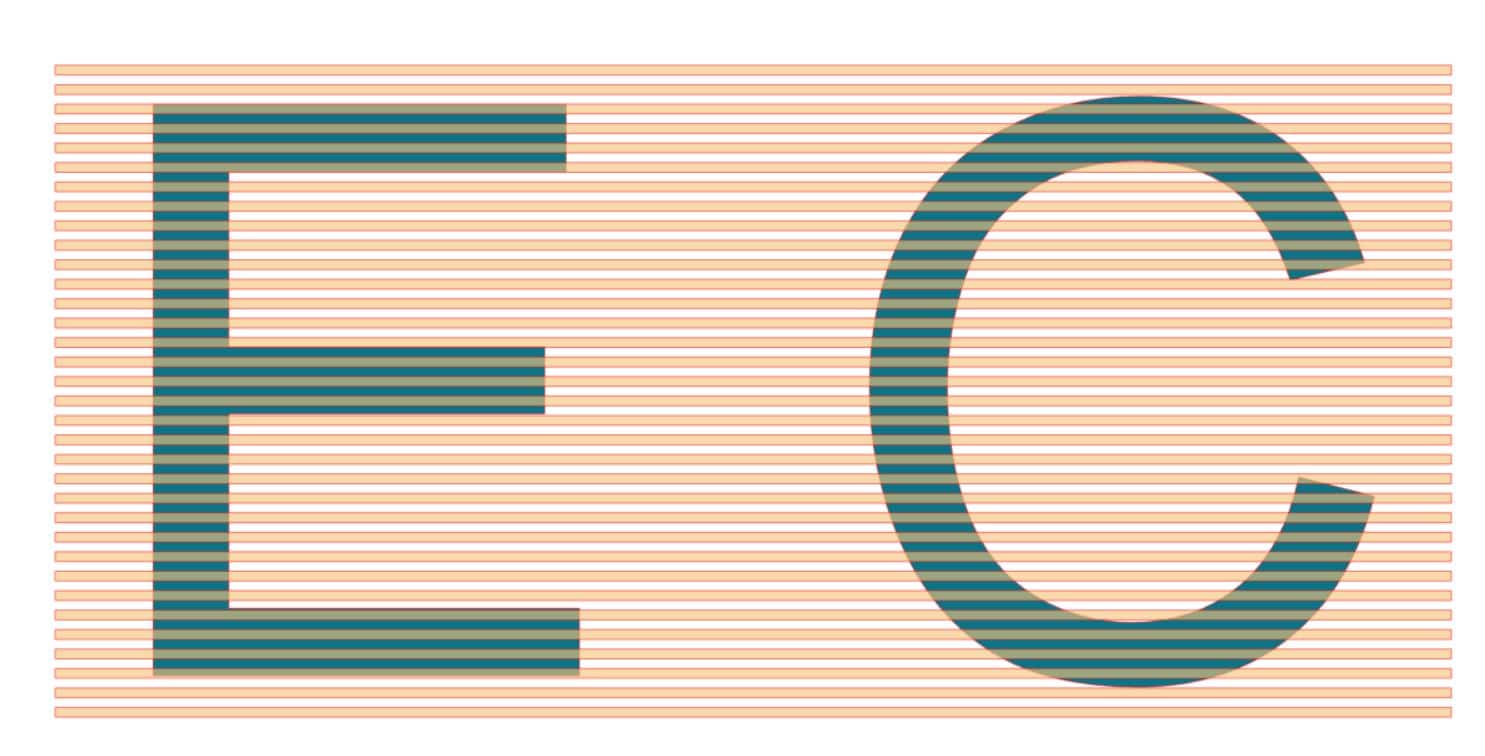 Once you have it, make your pattern shapes a single compound path. That makes the next step faster.

Select your pattern shapes and your text box and use a Modify tool. 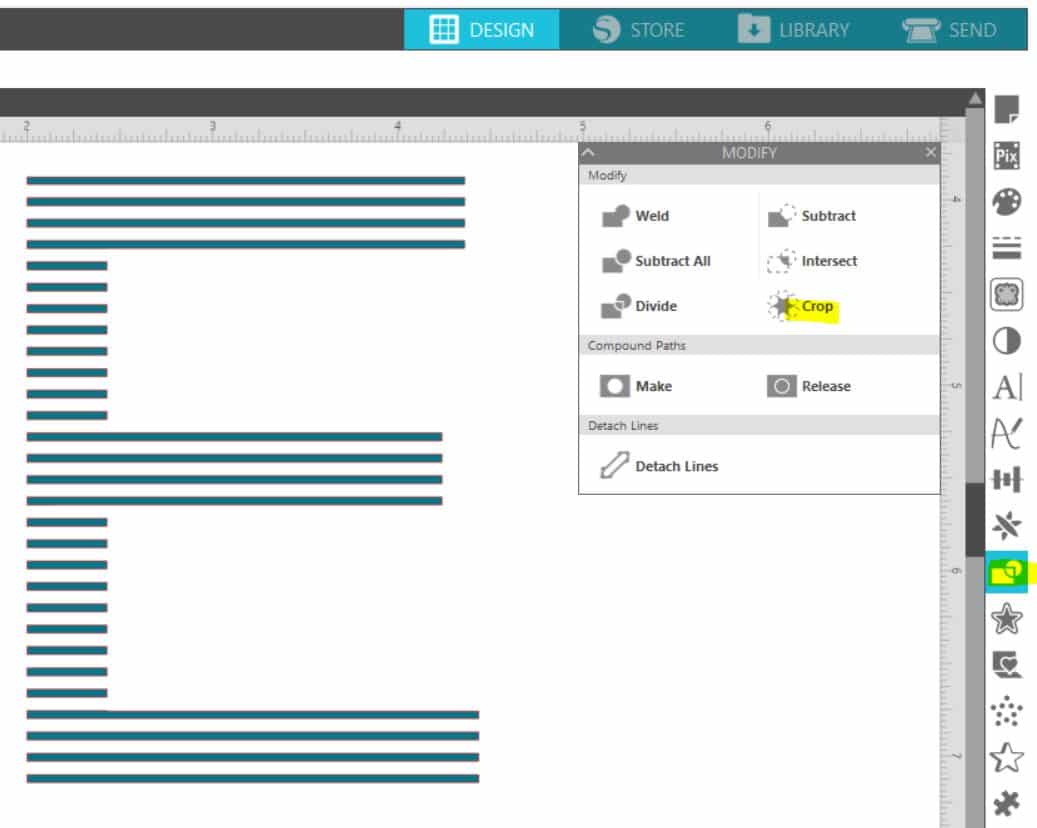 And there you go — layered text. 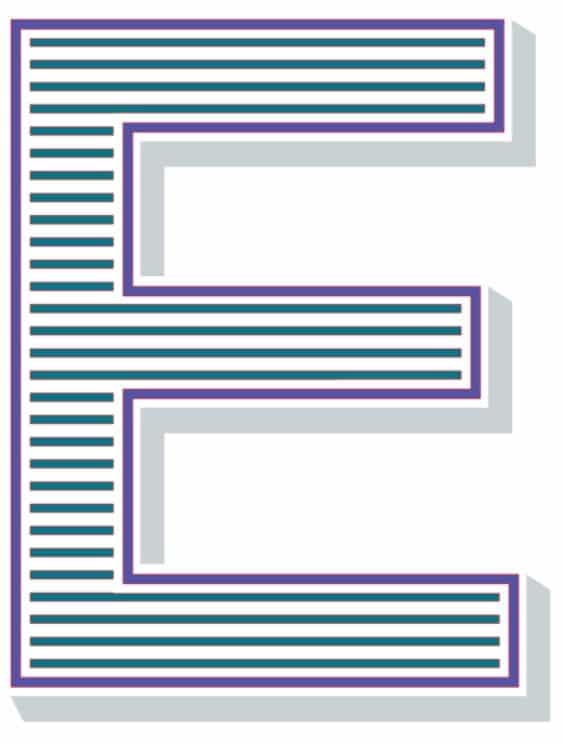 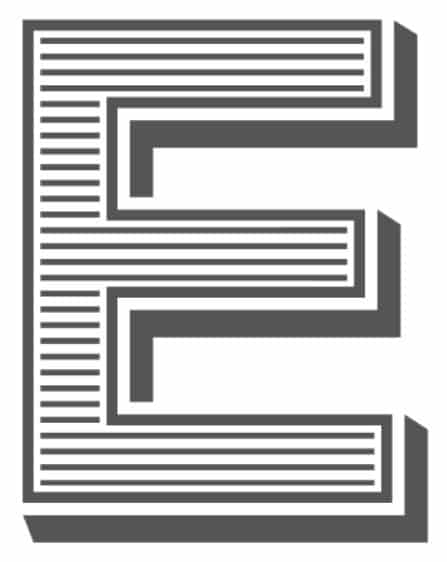 Here are a couple of more examples of different layered font looks you can get with other patterns.

After doing all this work, you could use Font Creator to save your letters as a layered font to use more easily in the future. But that’s a lesson for another day…