In our series about working with text in Silhouette, we’ve already busted 10 common myths. If you haven’t read those, then start here. The 5 myths we’re talking about today are 5 more about fonts. They deal with how fonts are organized and working with special types like those with glyphs.

Note: This post may contain affiliate links. That means if you click the link and purchase something, I may receive a small commission. This helps me to be able to keep my business going and provide more tutorials. All opinions expressed are my own and are not tied to any compensation.

The only fonts you’ll see in your Silhouette Studio library will be those you purchased from the Silhouette Design Store. Those you’ve gotten from other sources or that were pre-installed on your computer aren’t in there, even though you can use them in Silhouette. And you can’t put them in there either, regardless of whether or not you’ve installed them. (The Local User folder at the top of the library has a folder called Fonts, but that’s deceptive – nothing will ever actually be or go in there).

There is actually a way to organize fonts within the library. This is a Designer Edition feature that was added in version 4.1. You can create different sub-folders within your fonts folder, name them and sort your fonts into them. For example, here I’ve created subfolders for Sketch and Cursive fonts. That way if I want to see my purchased fonts by type in my library I can just go to the different folders. 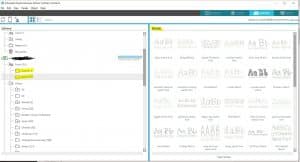 Before version 4.1, the fonts were ever only in alphabetical order. 4.1 added a section at the top of the Text Style panel (and the text list in the Quick Access Toolbar) for Frequently Used and Recently Used fonts. 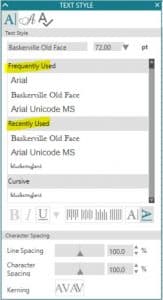 Also, if you have Designer Edition and have sorted your fonts into sub-folders, you’ll see sections in the font list for each of those folders. Those are in alphabetical order. The section All Fonts, which is below those, will still have those fonts in them along with those you’ve gotten from somewhere other that the Silhouette Design Store. 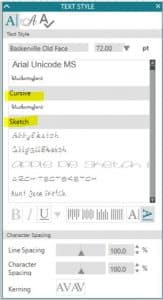 HINT: If you want a specific font sub-folder to be at the top of the list, just put something like AAA at the beginning of the folder name.

You may sometimes have trouble finding a font alphabetically. For example, this one in the SDS is called “Dream State” in the thumbnail preview, but the actual name is “Silhouette Dream State.” That puts it in a different spot in the alpha order than where I might expect.

HINT: You can open the Properties of the font in the library and change the name if you like. This is a way to organize fonts if you don’t have Designer Edition. For example, you can put the word “Script” at the beginning of each of your script fonts so that they’ll show up all together in the Text Style panel and in the fonts folder in your library.

Version 4.2, tentatively scheduled for release fall 2018, will also include a new way to keep track of fonts from the SDS for which you have purchased a commercial license. They will have a $ beside it in the font panel. Eventually, you’ll also be able to designate fonts you purchase elsewhere as commercial in your library. If you hover over the font, you’ll see details of the license (like how many items you indicated you would sell using it).

“Fonts are made up of only letters”

If you love fonts like I do, it’s a wonderful time to be alive. There are SO many new options with fonts! They have evolved beyond just letters to include design elements.

Again, this is a feature being added in version 4.2 and it is COOL!!! It’s a bit hard to explain, but it is definitely different than just a font filled with color or pattern. The colors and designs are built into the letter within the font, so there can be multiple colors within the font and some may overlap. I had a hard time visualizing it, so one of the guys at Silhouette sent me a link to an article about them. I was reading the article and still not quite understanding until I got to the end of the article with some visual samples. Then — MIND BLOWN! Look at these examples of what a color font is: 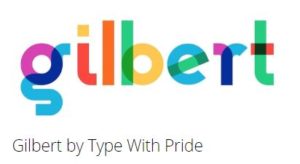 These are fonts that have pictures instead of letters. For example, I have a font font called Bergamot Ornaments. When I type my name with it, here’s what I get:

What’s neat about dingbat fonts is that it’s a great way to get a bunch of designs you can cut. I will say that not all dingbat fonts are made well so some aren’t useful for cutting. But many are. There are even some in the Silhouette Design Store. 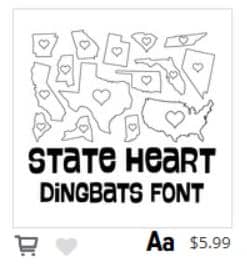 HINT: To figure out which letters to type on a keyboard for which dingbat pictures, use your Character Map (Windows), the Font Book Repertoire (Mac) or the glyphs panel (Mac or Windows, with 4.1 and up AND Designer Edition and above). Keep reading to figure out how those work.

A character is a letter, number, punctuation mark, etc. For example, every font will have a letter “t,” because that’s standard in the English language. But the way it looks in each font is called a glyph.

The past few years, we’ve seen the addition of multiple glyphs in fonts. For example, a font may include several different options for the letter “t.” While “t” is the character, there may be multiple glyphs for it – a plain one, one where the beginning of it has a flourish and a different one with a flourish on the end, etc. In other words, you aren’t limited to just 26 capital and 26 lowercase letters and standard punctuation.

In Silhouette Studio, we often refer to glyphs as the extra fancy or optional characters in a font beyond the default one. For example, with the Samantha font, I have all these choices for an “s.”

I would use a different one depending on where the “s” is in the word or how I wanted it to look.

Besides just variations on letters, a font may also include extras like curlicues you can put wherever you want.

Well, your computer keyboard doesn’t have multiple choices for an “s” – only lowercase or capital. So how to you add those in Silhouette? That’s our next topic.

HINT: The space needed for all those fancy flourishes has to be built into the text box. This is a prime example of what we talked about in Text Myth #1.

This is another thing that stumps lots of folks because they have no idea how to get those alternate glyphs choices when adding text in Silhouette Studio. If I type an “s” in the Samantha font, I get this. 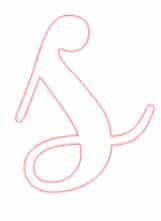 So how do I get those other beautiful glyphs? You can use them in ANY level of the Silhouette Studio software. But how you can access them depends on which level and which version you’re using. I have included instructions and videos.

Using glyphs with Designer Edition and up in version 4.1 and up

Starting with version 4.1, Silhouette introduced a way to access glyphs right in the Text Style panel if you have Designer Edition and up. Here’s what you do— 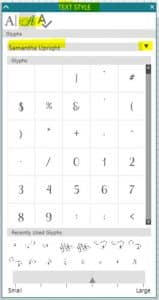 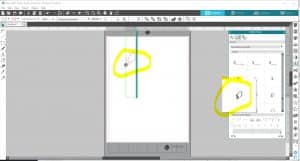 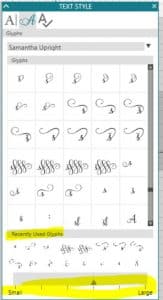 Here’s a video showing you how to do it.

Using glyphs with any edition before version 4.1 or Basic Edition in any version (Windows)

If you don’t have Designer Edition and up, or haven’t updated to at least 4.1, you access glyphs using a Character Map. That’s exactly what it sounds like — it shows you every letter option or character in a given font, just like a map shows you every possible route. You find the glyph in there and copy it to Silhouette Studio. Here’s how: 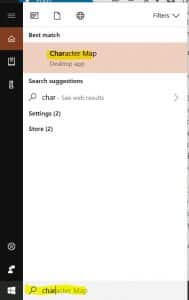 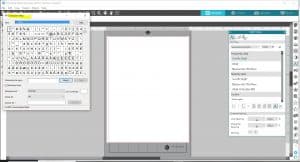 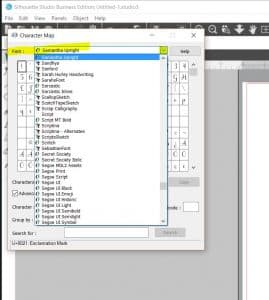 HINT: When you open the Character Map, the font you used last (if any) is the selected one. 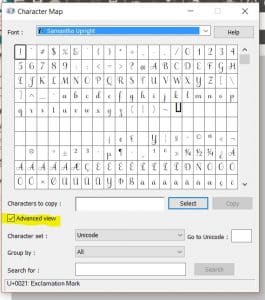 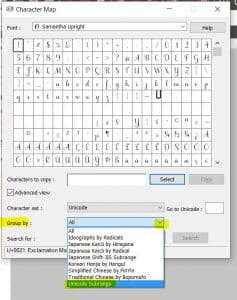 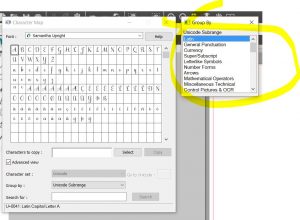 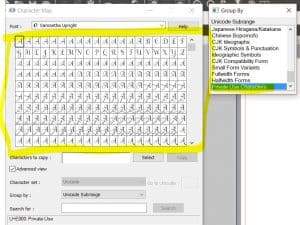 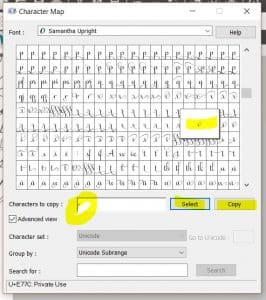 HINT: You can select several before you click Copy to get more than 1 at a time. 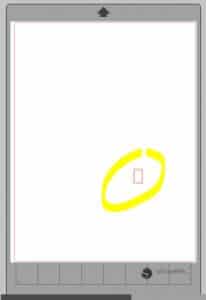 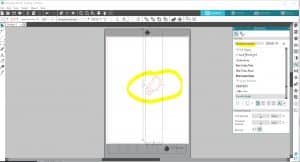 Here’s a video of how to do it.

Using glyphs with any edition before version 4.1 or Basic Edition in 4.1 and up (Mac 10.9 OSx and above)

If you don’t have Designer Edition and up, or have not updated to at least 4.1, you access by using your Font Book. You find the glyph in there and copy it to your Silhouette Studio software. If you’re using a lower Mac version, it’s a bit different, but those are so old I’m not going to go into it here. You can post a comment at the end of this post if you need help with that. Here’s how to add a glyph to your Silhouette design:

Because I’m a Windows user, I don’t have a video or screenshots for you. But here’s a video by Laura Worthington, designer of the Samantha font. She goes fast, so you may have to watch it several times.

“Sketch fonts are only a single line”

A sketch font is one that you use when you want to draw out the words with a pen instead of cutting them out with a blade. I did this to address the invitations for my daughter’s wedding. (You can see my post about that here.)

While they LOOK like they are only a single line…

…if you zoom in really close you’ll see that’s not the case. It’s really 2 lines like any font (it’s 2 dimensions, not 1). The width of the pen is less than the width of the space between the letters, so in reality what’s happening is that the 2 lines are virtually, but not REALLY, on top of one another. 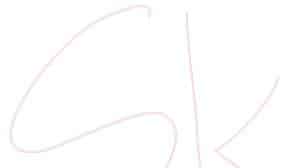 When the machine draws the text, the lines are so close together that they appear to be a single line. 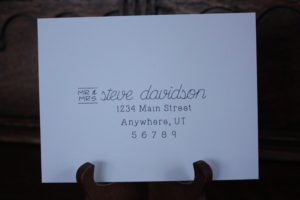 Why does that matter? Because if you are trying to do any point editing or Modify options with those letters, they will respond differently. They are closed paths, not open-ended paths. For more info on the difference between open and closed paths, check out my series on Point Editing.

We’re halfway through our 30 myths, but there’s still a good deal to learn. Next time, we’ll delve into controlling the location and shape of the text. That includes the ever-popular feature of wrapping text around an image.