This tip is probably one of the most important to remember when cutting without the mat, and it’s one many folks don’t ever recognize as causing an issue with their vinyl shifting. It’s all about getting things started straight so the material stays under the rollers. It includes a super-duper method for helping load floppy materials. (To start with tip #1 in this series, see this post.)

Note: This post contains affiliate links. That means if you click the link and purchase something, I receive a small commission. You pay the same price. This helps me to be able to keep my business going and provide more tutorials. I will always be honest about my opinion of any product.

In order to cut straight, your material has to load straight.

Tip #10: Check to see if the material loaded straight

This one makes good logical sense. If the material doesn’t feed into the machine straight, that means it’s crooked before you even start. It’s going to continue to get even more crooked throughout the cut. If the cut is a long one, eventually one side or the other will no longer be under a white roller and, since it’s not being gripped, the material starts moving all over the place. This is actually really common and very preventable.

We’ve already talked about the leading edge being straight and perpendicular to the side, so that’s a given. But even with those things in place, the material can still load crooked. This happens when one white roller grips before the other. Typically, it’s the left roller gripping before the right one. The second one eventually catches, but if it’s a little after the first one did, the material will be crooked. That means trouble.

When cutting without the mat, get into the habit of ALWAYS looking behind the roller bar after you load your material. Use the cutting strip as a guide. If the material is parallel to the cutting strip, you’re probably good. If it isn’t, you need to unload and try again until it is.

Here’s a piece of material that loaded straight. 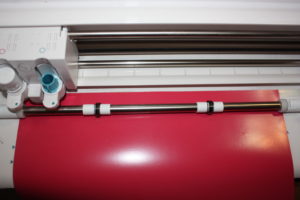 And here’s that same piece of material loaded crooked. 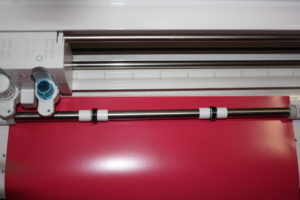 It can be tricky to load vinyl or HTV. One reason is that it’s floppy. (We’ll get into a second reason in a later tip). It can be very frustrating to get it to grip on both sides at the same time when you are trying to hold it at both sides and push the load button.

Let me teach you a SUPER good trick that someone taught me early on. I call it the riding on cardstock method. I’ll explain it, then watch the video to see it in action.

Let’s say you end up LOVING to cut without a mat and so do it frequently. Let me teach you another trick that will save you loads of time and frustration.

At the bottom of the Send area in your software, you’ll notice a gear icon.

This isn’t the same as the gear icon you see in the Design area. That one is for overall software preferences. This one is for Advanced Cutting options and it holds a nifty little feature for cutting without the mat. Click on it to open the dialog box. 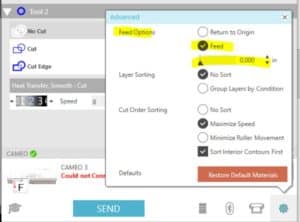 Look at the first one called “Feed Options.” The defaults it Return to Origin. When set on that, after the cut is complete, the material rolls out to where it was when first loaded.

The second option is called “Feed.” When you choose this one, you can have the material roll through farther so that you can cut again without unloading. This means you don’t have to keep unloading and reloading once you’ve got it in. You load, it cuts, it rolls the material so that the bottom of the cut is past the blade carriage. Then you send a new job and it starts below the first one.

You also select the distance of the feed. In other words, how far past the bottom edge of the first cut do you want the second one to start. Notice in my picture above that there’s an area for you to input the measurement.

There are a couple of things to be aware of when you use this Feed option: 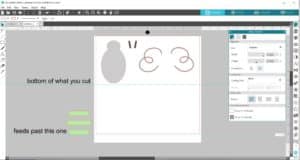 The Cameo 4 has an Autoload feature. With that, you press the load button, then have a few seconds to position the material under the rollers. I’ve got a full description of that here.

In our next tip, I’m going to give you another tip on checking to make sure your material is going to feed straight. Again, it’s something you can do before you start cutting to ensure that your material will stay under the rollers.