The very first thing you’ll look at in the settings of the version 4 Send area — so that right side — is the Cut Mode. It’s not actually called this, but that’s how the manual describes it and the name it used in version 3. This is in the row with the words “Action by:.” We’ll talk about the Simple cut mode today. (To start with lesson #1 in this series, go here.) I’ll introduce you to each cut style — No Cut, Cut and Cut Edge — to learn the difference between them, as well as how and when to use each one. Some of it isn’t exactly what you expect, and some of it is more useful than you may realize at first glance.

Note: This post contains affiliate links. That means if you click the link and purchase something, I receive a small commission. You pay the same price. This helps me to be able to keep my business going and provide more tutorials. I will always be honest about my opinion of any product.

This is where you choose the Cut Mode. That means the method you’re going to use for determining which shapes will cut or not cut. Your options are Simple, Line, Fill and Layer. We’re just going to go over Simple in this lesson.

In version 3, Action by: Simple was called Standard Cut Mode. This is the default. You select each shape individually and make choices for it. You can’t cut in a specific order or use choose more than 1 material (other than using both tool holders).

Even if you are using both tool holders (Cameo 3 or Curio only), you can’t use 2 different sets of cut settings for the same material. You can, however, have different choices for the action you’re doing to that material or the tool you’re using to do it. Don’t worry — we’ll cover all of that.

Your cut style choices are No Cut, Cut and Cut Edge. This is not labeled as Cut Style as it was prior to version 4, but that’s a helpful term to use. Select any shape to see it’s current cut style or change it to a different one. 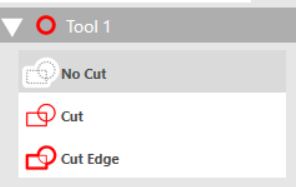 This is where you want to pay attention to the 2 tool sections if you have a Cameo 3 or Curio. So to use Tool 1 (the left one on your machine) for a shape, you would first select the shape and then choose the cut style in the top portion of the panel. If you want to use the tool in the right holder on your machine for a selected shape, you choose your cut style and setting in the Tool 2 section. All shapes will be set to use tool holder 1 unless you change that.

In Action by: Simple, shapes with Tool 1 chosen and set on Cut or Cut Edge have red lines. Those with tool 2 chosen have blue lines. That’s a critical part to learn to read in the Cut Preview. If the shape is set to No Cut, the lines are their original color. 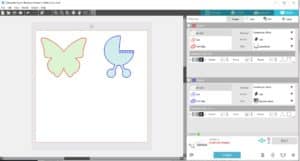 If you are using layers in Designer Edition, you’ll see all you shapes that are set to cut, even if they aren’t showing in the layer you are viewing in your Design area.

With this cut style, the selected shape doesn’t cut. The lines of the image will be pale and thin in the cut preview. 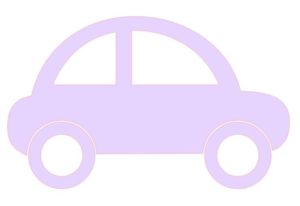 SVG files usually come into Silhouette Studio set on No Cut. All you need to do to make them cut is select a different Cut Style.

Every line of the shape cuts. This is the default cut style for cut shapes you buy in the Silhouette Design Store. It’s SUPPOSED to be for any shapes, lines or text you create in the software, but I’m finding that it some versions elements you create are defaulting to Cut Edge. That’s why it’s important to read and understand your Cut Preview. Shapes with this option selected have a bold line. 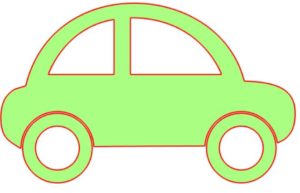 If you raise the line thickness, this cut style cuts in the middle of the line. You may need to zoom in to see this in the Cut Preview. I’ve changed the color of the line to black here so you can better see the red cut line (red because it’s using Tool 1). 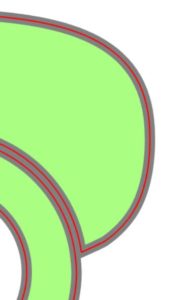 Areas where shapes overlap don’t cut. Shapes with this cut style have a brighter bold line. The parts of the lines that are pale won’t cut because they are in that overlap area. 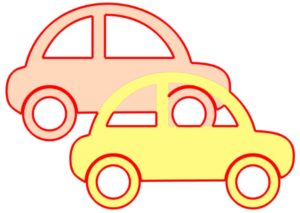 This is a very misunderstood cut style. Many folks think if they choose this on a design, only the outside edges cut. That isn’t necessarily the case. Notice that in my cars, the windows are cutting even when they are set to Cut Edge.

It depends on if your design is grouped or in a compound path. With the former, inner shapes don’t cut. If it’s the latter, the inner shapes WILL cut because they are actually edges. For example, if you type the letter “o,” it’s a compound path. The inner circle will cut when you choose Cut Edge, because that inner circle is an edge of the letter, not a separate piece.

To get a better understanding of groupings vs. compound paths, see this post.

For Cut Edge to work, all overlapping shapes must have this cut style selected. If you have a machine with 2 tools, the shapes must use the same tool.

If you raise the line thickness for Cut Edge shapes, it cuts along the outer edge of the line on a filled shape, but on both sides of the lines on an unfilled shape (you can use a white fill if needed).

Here’s a picture of cursive text with Cut Edge. Notice the black lines where the letters meet are pale. That means they won’t cut. I know that because I know how to read that cut preview. 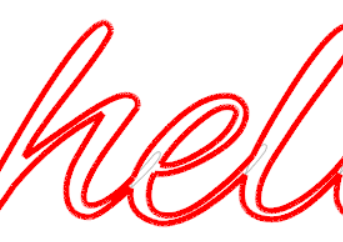 Here’s a pic of my design with the different cut styles. Pay particular attention to the strengths and colors of the lines. 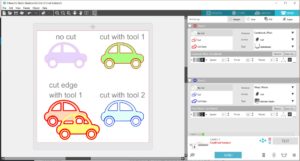 Now that we’ve got an understanding of simple cut mode and cut style, we’re ready to learn about material, action and tool choices. That’ll be our next lesson.