I just got some exciting news! In case you didn’t know, the Cameo 4 will launch on Tuesday, September 10, 2019. I will be attending a special Launch Party that day and will sharing pictures and videos of the new machine in action.

Note: This post contains affiliate links. That means if you click the link and purchase something, I may receive a small commission. Your price for the product is the same. This helps me to be able to keep my business going and provide more tutorials.

Starting that day, there will be a VERY LIMITED NUMBER of Cameo 4 machines available for pre-order on the Silhouette America website. Let me tell you a bit about the machine and then I’ll give you a special link to the sale page that will also get you free shipping.* (US 48 contiguous states only). 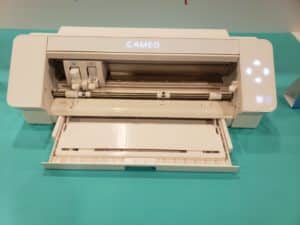 If you’re super anxious and already know you want one, go here on September 10 to get to the special pre-order page (it’s not active until that date). Use the code SMART at checkout to get free shipping* (US 48 contiguous states only).  But I do encourage you to read all the info here so you know the details and fine print.

The Cameo 4, like previous models, is a 12-inch width machine. But there are a TON of new features that are very exciting. They include:

Current models have 210 grams of force. The Cameo 4s will have UP TO 5000gf! This, to me, is the biggest change to be excited about. That means we should be able to cut all the way through thicker and more dense materials. There has been some conflicting information on exactly how much the force is. I should be able to give you an update after I attend the Launch Party next week.

Matless cutting — even for paper

I also think this is a HUGE feature. So many times I’ve been working on a cardstock project late at night when my mat gave out. (I know — I should follow my own advice and always keep a new one on hand). It sure would have been handy to be able to cut without one on cardstock.

What the machine will do is use a lower force at small, pre-determined spots on the design (mostly corners). The keeps the cut pieces from floating around in the machine and jamming the mechanisms. When the job is done and you unload, you will punch out the tiny areas where the paper is still connected. If you’re as old as I am, think the lick ’em and stick ’em books we used as kids.

When you’re cutting materials like vinyl and heat transfer vinyl (HTV) on a roll without a mat, this makes it easier to load, helps to keep it straight and keeps the roll from falling off your work table. I find it a BIG help.

The Cameo 3, Curio and Portrait 2 have 2mm clearance under the roller bar that the motor runs along. Earlier models have 1mm. The Cameo 4 has 3mm. That means you can load thicker materials. For example, you can tool on thicker leather or etch on thicker acrylic. But make sure to read the info below on blades.

Instead of a locking/unlocking mechanism on the rollers it’s a press and slide.

The Cameo 2 and 3 models have a crosscutter to help trim vinyl or HTV right from the roll. That means you don’t have to keep unloading and reloading between jobs. The crosscutter on the Cameo 4 is improved. That’s good news, because the one on those earlier models doesn’t really work well. Rolled material can get caught in it and it’s pretty hard to get a clean, straight cut.

I do how the software and firmware are also improved. Right now, the machine doesn’t always roll up to a consistent, logical spot to slice the material or always roll back to the correct spot afterward.

If you have a Cameo 3 or Portrait 2, you know how annoying it is to wait for it to adjust (yes, we live in a very impatient society). I’ve got a great time-saving tip in this post. The Cameo 4 is supposed to have a different AutoBlade and tool carriage that make it adjust faster.

This isn’t super huge, but I think it could be really helpful as I seem to be getting more and more forgetful these days. The Cameo 4 will detect which tool you have inserted, check with the software to see which tool you have chosen in the Send area, and inform you if they don’t match. In other words, when you mean to have a sketch pen in but you forget to change that out with a blade, the Cameo 4 will keep you from ripping up your nice cardstock.

If you look at my photo above, you’ll notice you don’t see a lid. It slides right back into the machine. This can be good news for those with toddlers who like to pull at things, or for anyone who keeps their machine somewhere with low clearance above it.

The touch screen has come a long way since the not-so-great one on the Cameo 2. With this new one, you won’t even see it when the machine is off. I guess that’s supposed to be a “sleek design.” Check the photo above to see it.

Things you should know about the Cameo 4

The price on the Silhouette America website on September 10 is $299.

Keep in mind September 10 is a PRE-ORDER date. The Cameo 4s expected to ship in October.

The Cameo 4 has 2 tool holders, like some earlier models, but they are different. The left one is the same as the Cameo 3. The mechanism for right one has been changed, which is how you get the greater force. That tool holder will ONLY work with certain tools that can use that greater force.

What this means is that you can’t necessarily put 2 tools that you want to use in the 2 tool holders on one pass through the machine. Say, for example, that you wanted to use a sketch pen in the left holder and a regular blade in the right one. You can’t, because the regular blade doesn’t work in that right one. It’s not a huge deal, because you can always add a pause to switch out tools in the left holder. But it’s worth mentioning. If you think you’ll never use the large amount of force, the Cameo 4 may not be for you. Snag up a Cameo 3 before they’re gone or take really good care of your current model.

At this time the Deep Cut Blade is still only able to extend to 2mm. So while you can load thicker materials on a Cameo 4 and not have them run into the bar, you still are limited in cutting depth. A 3mm blade is in the works.

The opening that holds the tools on the Cameo 4 is larger than earlier models. That means you can’t use the current AutoBlade in it. It will come with an adapter for current ratchet blade types so you can use those. The adapter will also work with sketch pens, but they have to be the new sketch pens. I’m not sure yet if the pen holder will fit in the adapter. If you use after-market tools like a pen holder or etching tool that’s not manufactured by Silhouette, those may or may not fit.

The Cameo 4 comes in white, pink and black only. That’s fewer colors than the Cameo 3.

The Cameo Plus, a 15″ cutter, and Cameo Pro, a 20″ model, are coming out in approximately January. If the wider cutting range appeals to you, you’ll want to wait for those. Those are white only.

That’s all the info you should need to make an informed decision. Please know that this page won’t be active until September 10. So if you click on it now, you’ll just get to the general SHOP page on the Silhouette America website. On September 10, you can use my code SMART at checkout to get free shipping. If you really want one, get there early because I’m pretty sure they will sell out very quickly and there’s no word on when they will restock.

Go here on September 10 to get to the special pre-order page. Use the code SMART at checkout to get free shipping.* (US 48 contiguous states only).