I shared with you recently how I created my own custom plaid patterns to match some flannel fabric I had purchased. I used the fabric to create table runners for a baby shower, which I turned into a baby quilt later. You may recall that the theme of the shower was sports, with an emphasis on Tennessee Volunteers. The couple are also really outdoorsy, so the flannel worked into that and we included natural elements as well. Today, I want to show you the rest of the decorations we used for the tables.

For the base of the centerpieces, we used square glass vases filled with sliced oranges, greenery and baby’s breath. Then we tied some ribbon around each vase. Around the vases we scattered some balls from the dollar store. We created cardstock baby onesies and balls, attached them to wooden skewers, and used them as picks in the vases.

If you aren’t in the habit of hitting up craft stores after a holiday or season when things go on sale, this will probably convince you. Since it was getting past fall, we found football pumpkins and koozies at 90% off. I’ll show you in a bit what we did with the koozies. We tied tulle ribbons and balloons onto the football pumpkins. (The pumpkins are hard to see in the photos. I didn’t focus on them too much because there’s no Silhouette stuff on them). 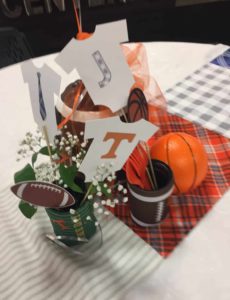 Now, let me show you how I created some of those components.

For these, I used a design from the Silhouette Design Store called Outfitting Baby by Echo Park. I used a white textured cardstock and made them 4 1/2″ tall.

To make them custom, I added these elements: 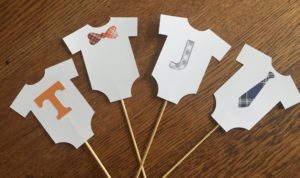 Back when my son was in high school, I discovered some really cool papers with a football and basketball texture. They make shapes you cut out of them way cuter than plain paper. I believe I’ve found these both at JoAnns and Hobby Lobby. 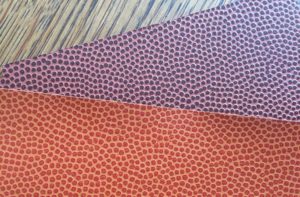 Textured cardstock like this can be challenging to cut, since the surface is uneven. I usually cut from the back side and do 2 passes. And of course I ALWAYS check the cut before I unload.

You could also do your own embossing with a Curio. Or, use an embossing pen and clear embossing ink to add dots to regular cardstock for a similar effect.

I used a this basketball shape from the Silhouette Design Store. For that, I cut the circle from the basketball-textured paper and the lines from black adhesive cardstock.

For the football, I used this one by Lisa Norris. 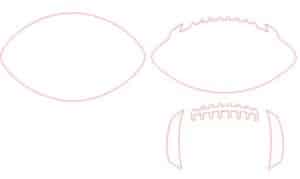 The offset I cut from the same white textured cardstock I used for the baby onesies. Since you can see through the football paper to the offset piece, you get the white you have on a football. 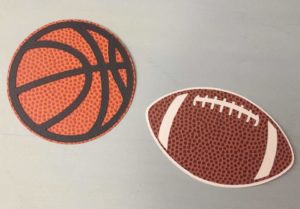 We used the koozies on the tables to hold silverware, sliding a plastic cup inside to hold the form. The koozies came with a football degisn on some, a football field on others. I used scraps of orange HTV to add the “T” to those. We stuck some of the picks in these also. It’s a small thing, but lots of little things add up to a completely custom baby shower. 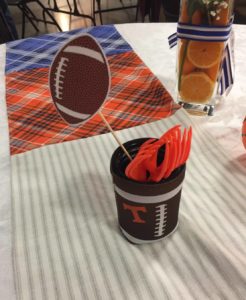 I want to show you one more thing we made as a decoration for the food table, but that’s a story for another day.

Need to know what lessons are here?

As an Amazon Associate I earn from qualifying purchases
We use cookies to ensure that we give you the best experience on our website. If you continue to use this site we will assume that you are happy with it.OkPrivacy policy